We all know working during November, December and January with short,cold,wet, grey days can be depressing as well as potentially more dangerous too! More so if you are driving for a living. Nevertheless when a machine needs moving then it needs moving. Here we are working in the twilight zone, moving Cardiff Demolition’s 47 tonne Volvo 360 from Nantyglo in the Ebbw Fach Valley to Rumney,Cardiff

Nantyglo, meaning ‘Brook of Coal’ in Welsh was in it’s heyday, circa 1844 one of the largest iron producing towns in the UK employing 3500 men, women and children this picture circa 1820. The Iron works were dismantled in 1878. 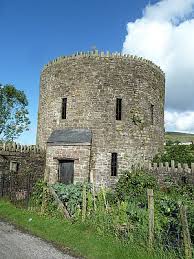 For more information on Nantyglo and it’s history please use this link: http://thomasgenweb.com/nantyglo_round_towers.html

Another move during the Twilight Zone-This one a Doosan 14 tonne excavator from Cilfynedd to Nantgarw for Cosslett. Doosan a Korean company manufactures the machines in China and employees 35,000 people in 38 countires. Cilfynedd, A major coal producing town at the end of the 19th century to the middle of the 20th , it’s Albion pit closing in 1966. It’s population grew from only 100 in 1881 to 3500 1901. Now around 3000

Related posts
It’s summer so get your bike or scooter out, MOT’d and ride-safely
28th May 2020

South Wales Police issue a warning to motorists
13th May 2020